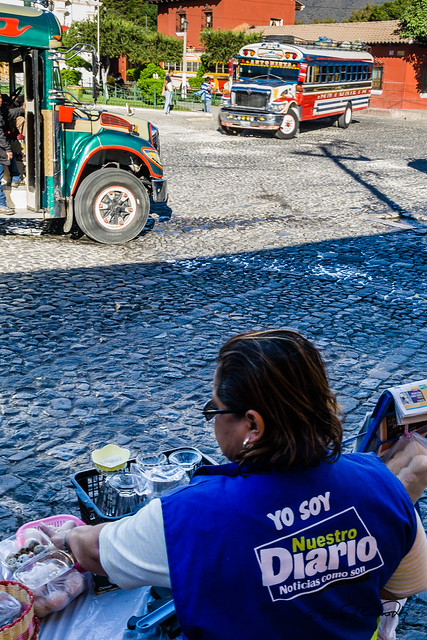 We began today's cultural discoveries by walking to the local market. Along the way Luis contacted local people. The first was a woman operating a stand at a busy corner bus stop selling fresh squeezed juice, hard-boiled eggs, snacks and newspapers [mostly the 'Nuestro Diario', local version of the National Enquirer] to commuters.

She begins at 5:30 am and stays until 11. She told us she sells duck egg mixed with juice for headache [sound familiar?] The quail eggs were good for asthma and all are good for energy. A lot of her business is done on trust: Bus drivers will come back later when it is less busy to settle up. 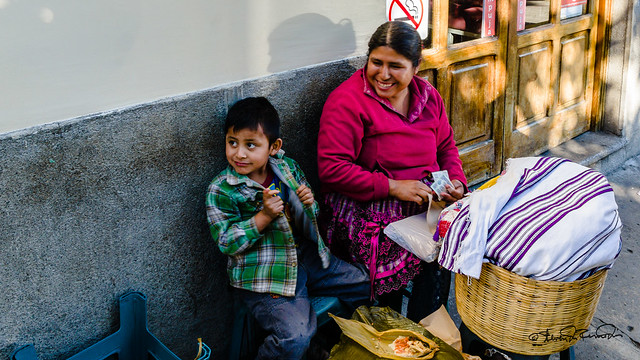 Then we stopped to talk with a woman with her young son, sitting outside the entrance to Pollo Campero, a fast-food chicken restaurant. Emelda is a widow with two children. She gets up very early in the morning to make tortillas from 35 pounds of flour, which she brings to sell to patrons between 6 am to 2 pm., who would like them with their purchase. She charges 1 quezale for 3 tortillas. At the end of the day she gives the leftovers to her poorer neighbors. 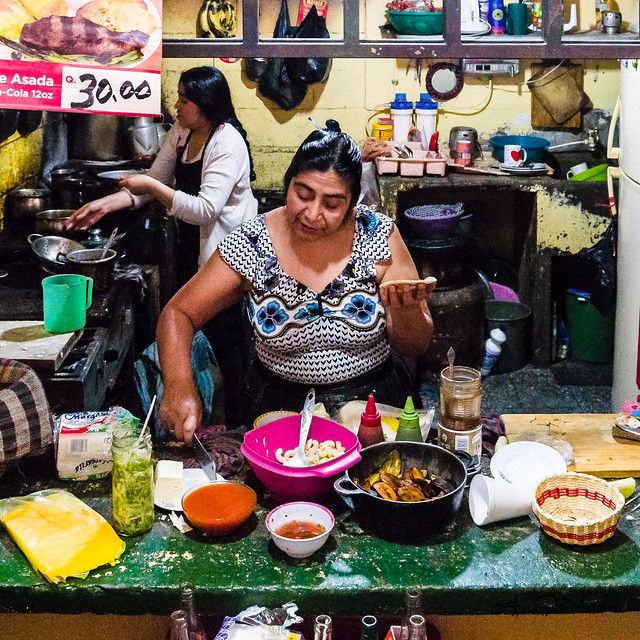 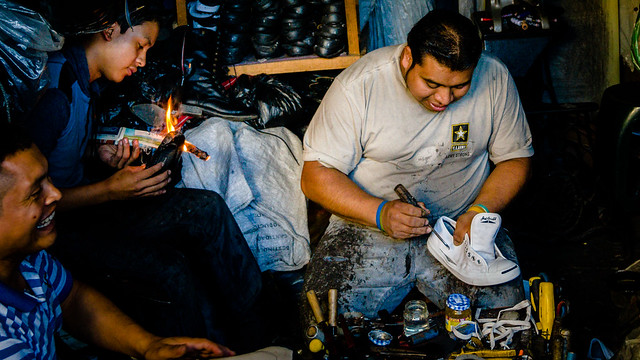 Inside the bustling market we met Mery and her daughters at her restaurant of 16 years Comedor Mery. The municipal government sold the rights to all of these spots to a broker who then sells or rents them out to individuals. She pays 2000 Q/month to rent her spot. Her daughters are grown and have families of their own but they come to help her when they have the time. Another shop was a kind of ferriteria, offering electrical supplies, electrical outlets, light bulbs and a selection of machetes. Luis showed us a variety of machetes would are designed for specific tasks. In much of the world, machetes are a part of daily life. 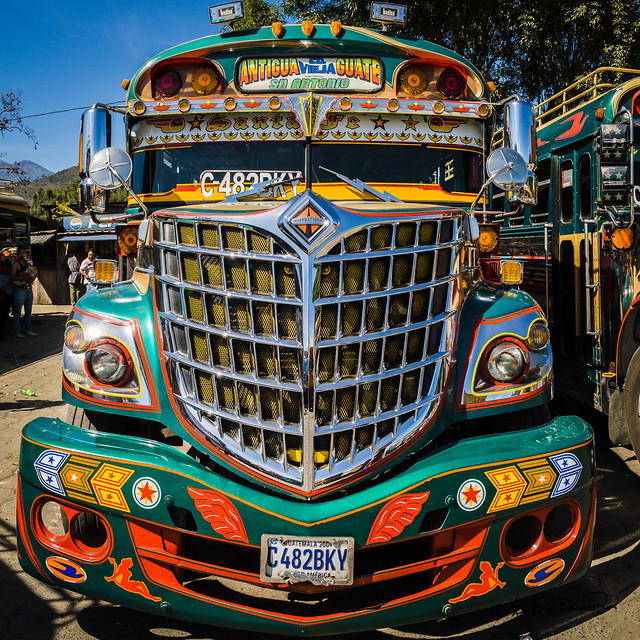 Next we boarded a 'chicken bus' to Jocotenango [aka Xocotenango; "place of many plums"] , a village northwest of Antigua where we would experience a day in the life of a Guatemalan family. The ride seemed like any old bus but with narrower seats. The passengers were friendly. 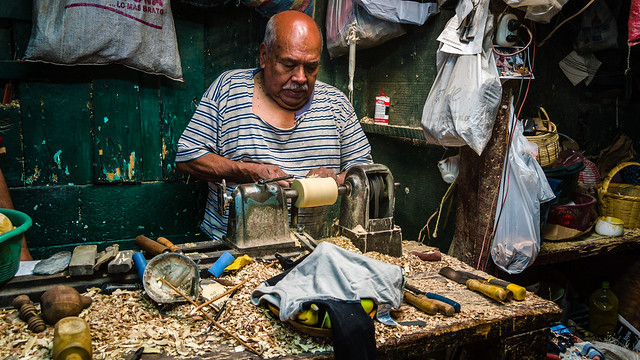 We visited the workshop of 75 year old woodworker Senor Tomas. Originally, he carved fruits using a machete. Then 40 years ago someone who had emigrated to the states sent him a lathe. After two years he learned how to use it and now makes wooden fruit which is painted to look quite realistic. Sylvia bought a lovely set of three pears on a tray. Tomas passes along his trade to youth in the vicinity.

We took the bus to our visit with a local family. Their home is three structures on the sides of a square lot, all opening onto a central patio. They normally eat breakfast inside together everyday. In the evening each sister cooks for her family in her own kitchen.

The men were all away working while the women stayed home with the children. Two residents had been found wandering on the streets after all their belonging were stolen. They were from Leon, Nicaragua hoping for a better life here in Guatemala, and the husband has found a job working for the local utility company. We prepared our meal in teams. 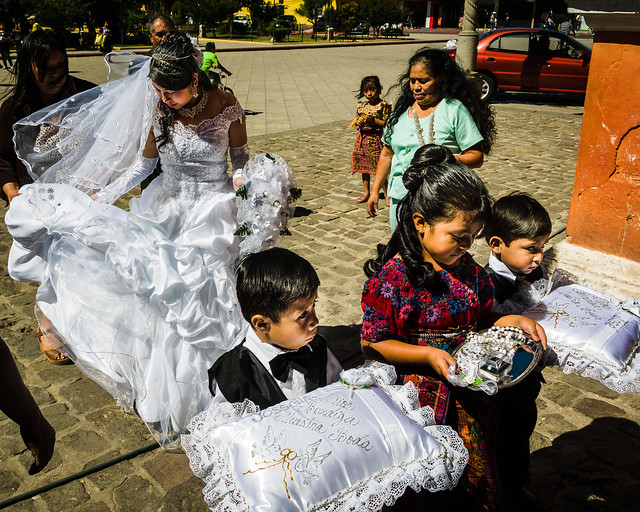 After returning to Antigua, we drove to Ciudad Vieja, a small town outside of Antigua, to have a better view of Volcan Fuego. The town was the capital for all Central America until the volcano erupted in 1574 and wiped out the town. Afterwards, the capital was moved to the current location of Antigua. The Catedral was built in 1534 and is still standing. 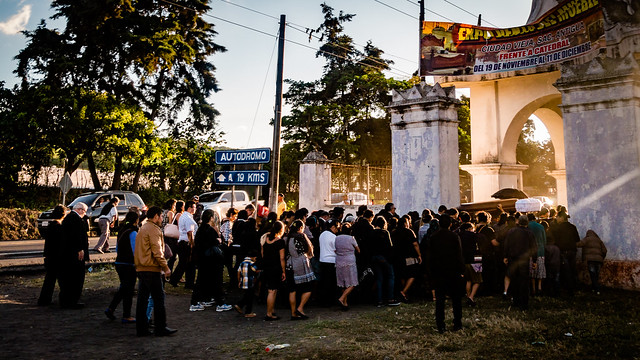 Shortly after leaving the village, we saw a funeral in progress. It appeared that the funeral was for a little child and an adult. We stopped a little further along the road to see Fuego again erupting. We then went to an organic macadamia plant that is owned by an American ex-pat, Larry. Larry and his wife were hippies when they started the ranch after moving to Guatemala in the 1970’s. He was able to increase his yield by using no chemicals and using the husks as compost. Even the paving material in the garden is made out of the inside of the nut because of its hardness. Larry developed a shelling machine made out a motorcycle wheel and also a very simple nut sorting device made from rods that gradually separated to allow for different sized nuts to fall through the spaces. Larry came and talked to us for a little while, especially since we were Americans and he loves to talk American politics (well, more like a rant!). His macadamia oil is now in anti-aging creams sold by Aveeno and Lancôme. While he discoursed on politics, we each were given a facial massage with the macadamia creams.

On our way back to Antigua we stopped at a chicken bus body shop. We met the son of the original creator of the chicken bus. The concept of the chicken bus was started in 1945. Several buses in different stages of ‘conversion’ were in the shop. The shop does all the work including new seat upholstery, engine conversion, merging bus and front ends of semis and painting.