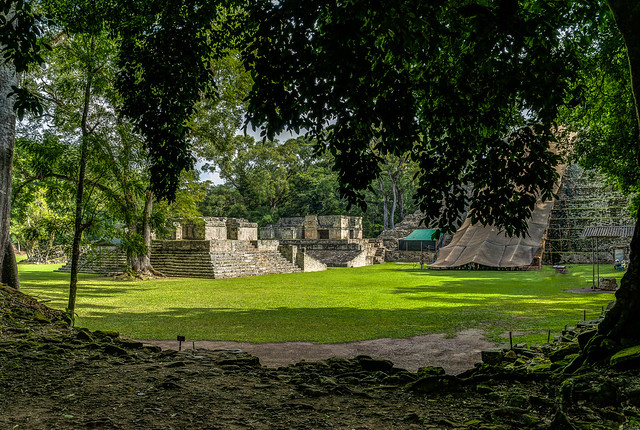 Designated a UNESCO World Heritage Site in 1980, Copán is Honduras' most significant pre-Columbian site and the most elaborate of all Maya cities, earning it the title “Athens of the Maya World.” 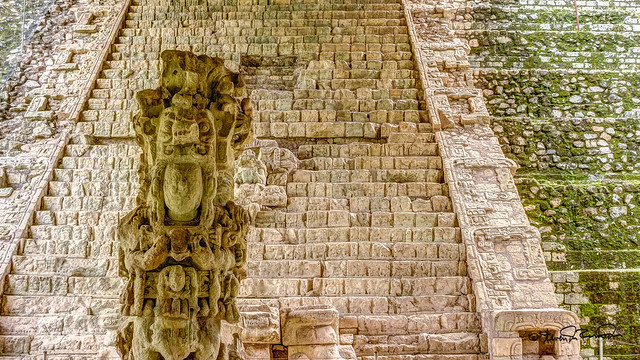 We spent a full morning here exploring its sprawling ball court, adorned with markers resembling macaw heads; and the Great Plaza, scattered with altars and lined with carved stone columns called stelae, which represent powerful Maya rulers and date from AD 711-736. Among the ruins here that have helped unveil Maya history is Altar Q, a rectangular stone altar with carved portraits of all of Copán's rulers, from the founder, Yax Kuk Mo, to the last ruler, Yax Pac. By going early in the morning, we had the ball court to ourselves for the first few hours.

Copan Sculpture Museum opened in 1996. It insures the safekeeping of the monuments and presents reconstructed façades. These façades contained the most plentiful, and often the best, stone sculptures in the city. The carvings fit together like mosaics to depict human figures, gods, animals, flowers, crops, and other motifs. 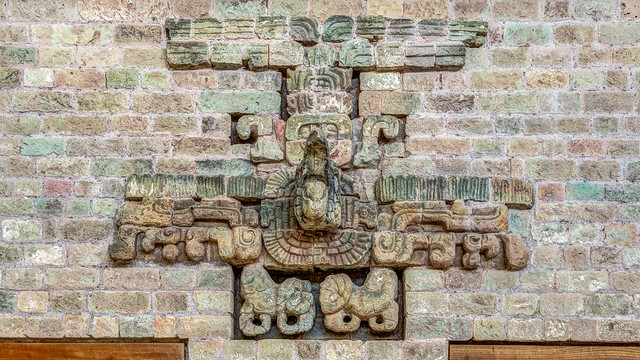 The centerpiece of the museum, rising two storey's is a reconstruction of an Early Classic temple - a terraced, two-story building dubbed Rosalila (rose-lilac). The original, discovered beneath Structure 16 of the Acropolis is the most intact structure ever found in Copán. A hieroglyphic step carved on its front stairway describes it as the work of Copán's tenth ruler, Moon-Jaguar, who reigned from A.D. 553 to 578. The full-scale replica reveals it in all its multicolored splendor. When the ancient Maya stopped using the original structure, they painted over its modeled plaster decorations in white. 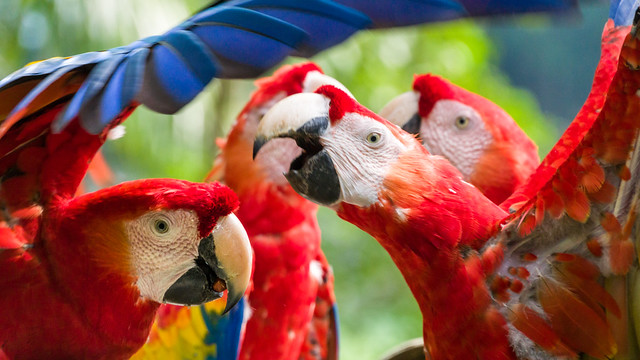 Luis had kept his ears open and by chance discovered that there was going to be a bat count at the Macaw Reserve that night on top of Macaw Mountain overlooking the town of Ruinas Copan. Most of us wanted to go to the Macaw reserve anyway which had been part of the optional trip minus the horseback ride. Jeff and Denise had a hot chocolate at a cafe there on site, above silty Cakaguatales Creek while they waited for the remainder of the group to walk through the Macaw Mountain Sanctuary and see the rescued parrots, toucans, and macaws that were being rehabilitated prior to being released back to the jungle. After the Sanctuary walk, those that wanted to help with the bat count stayed and the others went back to the hotel 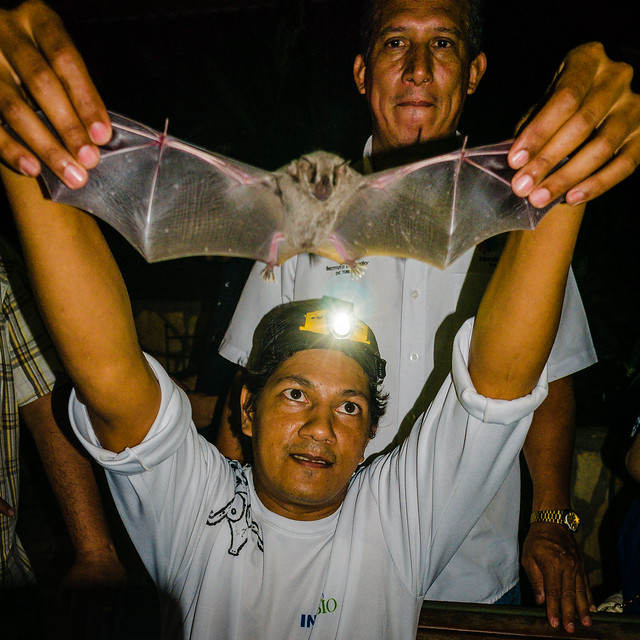 The 'Christmas bat count' has been going on for 15 years. In addition to maintaining a census of bats, it offers training to its volunteers and was advertised all over Latin America . The count has shown that some species have declined, while others have remained stable and eleven are endangered. We were told that there are 112 species of bats in Central America. There is no white nose disease here because these bats do not hibernate. Yesterday the group had censused at another location and netted 17 bats of seven different species including one vampire bat.

Volunteers set up four mist nets in the reserve, most spanning the stream, but others on the edge of the forest. Bat action began after total darkness fell, and as it got later the bat action increased markedly, unfortunately we had to leave for our dinner reservations. By the time we left, 8 were caught: 3 different species of leaf-nose bat and one species of fruit eating bat (which was really small) and lastly a lactating mother without her baby. Luis found out later that 44 bats were captured with more than 12 species represented which was a record.